Melbourne IVF: Vote NO to the proposed Agreement

Home » News » Melbourne IVF: Vote NO to the proposed Agreement

Management at Melbourne IVF have finally put an Agreement out to scientists to vote on and it remains unacceptable to MSAV members.

The Union has advised MIVF that members are not happy with the final offer. MIVF’s response is that they are prepared to put out the “Agreement” anyway, and see which way the vote goes – ie they are not prepared to change their position before the vote is counted.

The proposed Agreement will expire on 30 June 2021 which means we will be back preparing to bargain again at the end of next year if it is voted up – ie in about 18 months’ time!

How does the offer compare to the Nurses Agreement? The nurses’ agreement is a 4-year agreement with an average of 3% annual increases. And nurses get 5 weeks annual leave.

The Agreement which has been circulated clearly shows that management is not listening to you and doesn’t value its scientists.

At the end of the day Melbourne IVF does not have a business without the critical input of scientists. And without you they can’t deliver on their promises of helping couples start families.

If you want a better Agreement vote NO to the Agreement.

By voting NO you would be sending a very clear message that the proposed Agreement is not acceptable and MIVF need to revise their offer.

If you have any questions about the offer and what it means for you, please contact the Union on
9623 9623 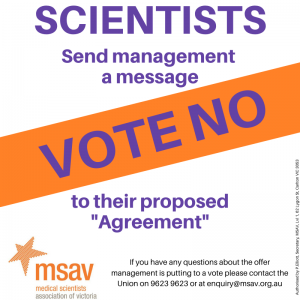