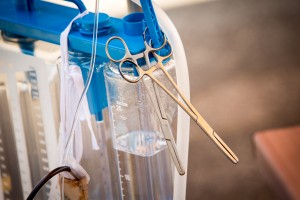 In late 2010 Western Health decided to put its pathology services out to tender. Until then Melbourne Health had been providing pathology services via a service contract between the two Health Services. This arrangement had been in place for around 10 years.

Melbourne Health employed all of the staff who worked in Western’s pathology services, mainly at Footscray and Sunshine hospitals. When the announcement was made in 2011 that Western had decided to offer Dorevitch the pathology services contract, the MSAV immediately commenced discussions with Melbourne Health, Western Health and Dorevitch to negotiate agreed arrangements for a wide range of issues, including jobs, industrial agreement coverage, transfer of accruals, hours, rosters and redundancy pay.

Melbourne Health flatly rejected this claim and refused to make redundancy payments to its ex staff, some with over 20 years of employment. Needless to say the MSAV and members were furious with this response and decided to pursue the claim through the Federal Court. We didn’t realise that it would be another 5 years before the case was finalised and Melbourne Health would be forced to make redundancy payments to this group of MSAV members.

Putting aside the technical legal arguments, we were adamant that Melbourne Health also had a moral responsibility to pay the staff it made redundant their redundancy entitlement. It is a disgrace that Melbourne Health fought for five years to avoid making these payments to a group of staff it had sacked and effectively discarded.

After spending a large amount of tax payer money in legal fees trying to deny our members their entitlement, Melbourne Health ultimately backed-down and agreed to pay everyone we represented their full redundancy pay entitlement, plus interest calculated from 1 October 2011, the date that Dorevitch took over the contract.

In this David and Goliath struggle the MSAV is proud to have achieved a settlement of this case that involves payments to MSAV members totalling $842,000. We are just as proud of the fact that we wouldn’t give up on a fight to make sure our members received every dollar they were entitled to.

The lesson from this case is that where a health service contracts out its pathology service (or any service for that matter) it MUST pay the redundancy entitlements under our agreement to all employees who are made redundant, irrespective of whether they accept offers of employment with an incoming contractor or not. We hope this will be an effective deterrent to any public health service thinking about contracting.