The rules that once made Australian workplaces fair are broken.

With inequality at 70 year highs, wage growth the lowest on record and 40% of people now in insecure work, our union, together with the ACTU and Australia’s other unions have launched a campaign to change the rules for working people.

The rules are broken so let’s change the rules!

As we build the campaign we will keep adding more content, resources and ways you can get involved.

We have a crisis of insecure work and low wages in this country and Scott Morrison’s Liberals are to blame.

They cut our weekend penalty rates. They raided union offices and tried to jail elected union officials fighting for safety on our worksites.  They handed $65 billion in tax cuts to corporations leaving schools and hospitals underfunded.

The Abbott-Turnbull-Morrison Government has overseen the largest decline in living standards in 30 years. That’s why on 10 April we’re taking to the streets with a national political protest for fair wage rises and better job security.

Join the Union’s contingent on 10 April from 10:15am at 62 Lygon St, Carlton where we’ll join the thousands of Victorians protesting for fair wages and better job security. 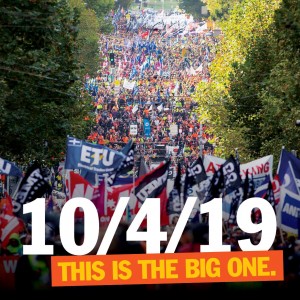 Workplace meetings are an opportunity to discuss the big issues we face at work, why the rules are broken and what we’re going to do to change the rules.

Victorian Trades Hall and their great volunteers have organised a bunch of events to speak to Victorian’s about changing the rules and what’s at stake at this year’s federal election.

Check out the events that are on near you and sign up at: http://www.weareunion.org.au/when

Check out the Change the Rules TV commercial below then share it with your friends, family and colleagues >> Big business has too much power