Monash IVF management has advised the MSAV that it intends to put the Monash IVF Scientists ‘Agreement’ out to a vote. This is despite the fact that no agreement was ever reached in the negotiations! And the Union takes this action as further proof of what we said back in September 2016 – your employer is keen to put you at a significant disadvantage in comparison to industry standards.

The Union strongly recommends that you vote NO to the ‘agreement’.

Here are some examples of what Monash IVF wants you to agree to:

Classification Structure and Wages: A flat and linear structure with no increments

No Disciplinary Procedure Clause in ‘Agreement’

Overtime: Overtime should be paid as soon as a scientist works beyond their ordinary finishing time but the ‘Agreement’ is ambiguous on this point.

On Call Allowance: An insulting $25 per 24 hours Monday – Saturday – ($50 on Sundays and Public Holidays) is being offered and it does not apply to scientists Grade 7 or Grade 8.

Ordinary Hours: You can be rostered to work to 8.00 pm at ordinary rates – under the Modern Award shift allowances apply to the whole shift if ordinary hours are worked after 6.00 pm

We will send out a more detailed analysis of why the MSAV recommends that you VOTE NO to the proposed ‘agreement’ – it is important to register your NO vote otherwise a YES vote might prevail!

What happens if the Agreement is voted down?

Negotiations will resume for an Agreement which includes proper salaries and terms and conditions of employment and we will organise a protected action ballot to allow members to vote to be able to implement bans and take other protected industrial action in support of a fair Agreement. 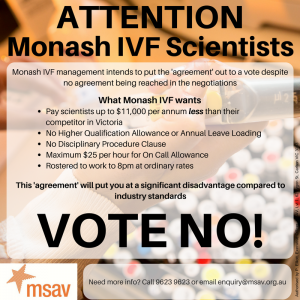