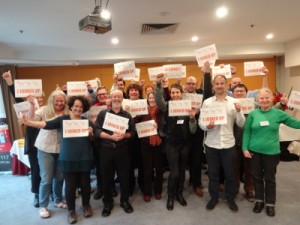 The MSAV, VPA Inc and AHP recently held its joint Annual Conference for 2016.

It was not uncommon to hear people mention their concerns about workload in the context of patient care. However it was great to hear people refuse to allow themselves to be described as unprofessional because of exploding workloads and the failure of employers to better manage the workloads. And in discussing how we can work together to stop unpaid work, there was a very positive response to the actions arising from St Vincent’s to resist doing unpaid work or fill gaps in rosters.

The conference heard that backfilling for absences has all but disappeared from workplace management practice.

With bargaining in healthcare having already commenced for other health unions, the conference heard from Craig McGregor, Secretary of the Victorian Allied Health Professionals Association and Paul Healey, Assistant Secretary of the Health and Community Services Union about their respective bargaining and the approach being taken by the Victorian Government. It was a very positive discussion and allowed people to highlight different matters about bargaining for an even better agreement in 2016. It was also great to hear that members are supporting the Union in developing claims to tackle workloads and unpaid work along with provisions to ensure staff are replaced when they leave or are on extended leave.

The conference provided another way for the Union to engage on the key issues as we prepare for bargaining to commence. And conference gave us an opportunity to continue discussing how together we can do something about unpaid work and workloads, especially in light of how members at St Vincent’s are dealing with unpaid work and staff not being replaced.

Read our article on St Vincent’s members standing up and saying No to unpaid work at: http://msav.org.au/news/standing-up-makes-a-rostering-difference/